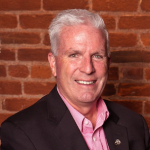 Today, our guest has been recognized as one of Inman News 100 Most Influential People in Real Estate and lives by the philosophy to build relationships, solve problems, and have fun! Our guest is Sean Carpenter, CEO and Founder of Sean Speaks, and a Coldwell Banker agent in Columbus, Ohio. I am thrilled to have him back on the podcast after being one of The Real Estate Sessions’ first guests.

In this episode, join Sean and me as we dive into the world of training and presentations as Sean shares advice for aspiring speakers. We also discuss some great Inman stories and the changes that Sean has implemented during the global pandemic.

“I started in my branch office doing ‘How to Do an Open House.’ I started to get invited by our Director of Training at the time to come up and teach that little segment of new agent training on open houses. I started getting good, and people started asking more questions. What was half an hour visit turned into an hour and a half visit.” – Sean Carpenter [13:25]

[03:49] The Buzz Around Genuine Relationships

[23:11] Life’s Standstill During the Pandemic

[29:35] How Sean Has Been Thinking Outside the Box

[35:40] Sean’s Thoughts and Insights on Clubhouse

Joining us today is Sean Carpenter, CEO, and Founder of Sean Speaks. In Episode five of The Real Estate Sessions, Sean appeared as one of the first guests over five and a half years ago. In this episode, Bill and Sean catch up and discuss how the nation’s current changes have impacted the real estate world.

Sean Carpenter graduated from the University of Florida before becoming a golf pro working at a resort in Brooksville, Florida. Sean moved back to his home state to work for a private golf club in Cleveland, Ohio, before leaving the golf business and returning to his hometown. Back in Columbus, Ohio, Sean became a beer salesman for Coors Distributor. Eventually, Sean Carpenter found himself at the Ohio State University campus working as a beer salesman, where he enjoyed the relationships he built and the product he sold.

This work led Sean Carpenter to the real estate industry, where he became an agent for four and a half years before becoming a branch manager. Sean found that he loved the coaching and training aspect the most in his position and decided to take a position as the Director of Training for the Central Ohio area for over ten years. Spending his time in front of a class of agents, Sean found his passion for speaking and decided to retire from the director of training role and jump back into sales. Sean founded his company, Sean Speaks, and travels national talking to real estate audiences big and small. Sean continues to actively work with the buyers and sellers in Central Ohio to understand the current markets and hold credibility for his audiences on the topics he is discussing.

Having around fifty detailed presentations, Sean can personalize and modify the presentations according to the audience he is speaking to. Sean found himself inspired by a mentor’s storytelling style and used the advice to lead him to his speaking career. Sean Carpenter works under his philosophy to build relationships, solve problems, and have fun! Sean’s advice to someone who aspired to be a speaker is to get in front of the room more. The more that you present, the better you will get at doing so. Take opportunities as they come and know that a small audience is just as important as larger crowds.

Before Coronavirus hit the nation, Sean Carpenter was spending around seventy-five to one hundred nights on the road with Sean Speaks traveling all over the country. Sean compares the global pandemic’s impact to driving down the interstate and realizing that the traffic you see ahead is at a standstill. Weeks and months went by with the world not returning to normal; people learned to improvise and pivot to continue to do the things they needed to be accomplished. Sean highlights the importance of the real estate industry as an essential trade as it contributes significantly to the economy.

With the pandemic, Sean explains he still had to find ways to continue to build relationships, solve problems, and have fun doing it. To keep Sean Speaks going, Sean began to use Zoom for conferences, presentations, and training sessions. Sean even began to reach out to companies who he previously did speaking for to offer a virtual discussion he calls ‘How to Keep in Touch When You’re Not Supposed to Be Touching.” He has presented this discussion at least 35 times and is still a relevant discussion at this point in the pandemic.

Sean Carpenter’s advice for new agents is to build relationships, solve problems, and have fun. To elaborate on that, Sean advises new agents to listen to every episode of The Real Estate Sessions as it gives a great mix of fantastic advice from some of the best in the industry!