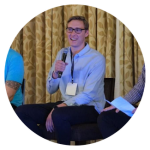 “As much as I might say email is dying, I think that the combination of text and email work really well together.”

“Messaging is really eating the world, and you just need to be present where your customers are; you don’t know where that might be, though.”

“All salespeople kind of give up on leads too early, and they are on to the next new lead.”

“For every 100 leads a typical agent gets, one or two will turn into a transaction…you only need to close one or two more to have a massive increase in revenue.”

[20:10] The considerable opportunity in old leads.

[24:05] What do you anticipate in the future with AI in Real Estate?

About “Structurely“: Des Moines, Iowa, is where Nate grew up, and it is gradually becoming a mini tech hotspot. While finishing school, Nate started the company, Structurely with his friend since both of them had an interest in Real Estate and technology. After talking with many agents, they realized that most agents disliked the aspect of following up with leads, which is typically the most challenging aspect with any form of sales. Nate and his friend decided to solve the problem with technology.

This was around when chatbots were getting a lot of hype, and they decided to take advantage of this method. Although the amount of lousy publicity chatbots got due to people’s bad experiences while conversing with them, the first goal was to ensure their chatbot conversations were human-like. Competitors often try to depict human conversations as better than their AI conversations. Still, the in-depth analysis showed that 99% of users do not think they are conversing with a chatbot.

Three main concepts to be defined for the chatbot to work included Slots, Context, and Intent. Building Structurely based on the framework using these concepts has been pivotal in creating human-like conversations. Additionally, the feedback from users or agents through a robust script customization product also helps the conversations grow in a more human-like fashion. It allows agents to customize conversations based on their individual preferred responses to different questions asked.

Although Nate believes email is a dying medium of communication, it still works well in combination with texts, and it will be in use for a long time. This, however, won’t alter the flaws of email like low open rates, low response rates, and high rates of abuse. Hence, they do not intend to replace such methods of communication; whether it’s email or text, messaging is a crucial means to communicate, and it is essential to meet customers where they are.

There is a massive opportunity in old leads. Unfortunately, most agents give up too early on old leads believing that a new lead has a higher chance of closing when it actually doesn’t. Structurely has been able to look into this and take advantage of old leads forming the source of most deals being closed recently. Not following up on old leads in any industry is simply a disservice to that business.

There have been several success stories from users of Structurely who benefited from the experience. It has also helped agents customize their chatbot as an assistant rather than as an agent. This creates a good relationship because leads lower their guard and relate freely. Some leads even go as far as requesting to meet the assistant they were chatting with, which depicts the success of creating very human-like conversations.

A significant expectation with AI in Real Estate is AI writing content on its own. This is made possible by the software GPT3, the world’s largest natural language processing model. It is trained on the entire corpus of text from the internet. This machine can execute tasks with a simple command; examples include writing sales copies, property description copies, follow-up texts, follow-up emails, and other forms of writing that consume a lot of time and energy from agents.

About “impactfulai.org”: There is a large amount of incorrect information about AI out there. One of these is that AI is “Self-learning”; this is not true because all the data AI learns has been labeled somehow at a point. This website aims to educate people on the myths about AI and the negative publicity of chatbots. Another benefit of having human-like follow up on leads is that while agents often complain about the poor quality of leads, machines do consistent follow-up, and these same leads are now seen to be of high quality.

Nate’s advice to new agents: Make yourself known on social media. It’s like being the digital mayor of your sphere of influence, and someone who Nate recommends people follow to see this practically done well is Emma Jordison.